Being Europe’s most treasured tourist destination Prague has very many tourist attractions that endear it to its residents and visitors. All these attractions have been praised due to their long historical background that dates back to several years before the world wars. Its traditional buildings that were literally not touched during the world wars give it a strong cutting edge over other tourist destinations. 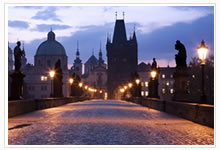 One of the landmarks of this historical city is the Eastern town that has political history that associates it with being the capital city of Prague’s towns when they united to form a government. The streets in this town show how the separation of the town was done with walls, before they got dismantled in the 13th century. Artists created a cultural center at the municipal house that is now one of the major attractions of the town. The house has fabulous architectural designs and artistic sculptures that represent the great works of its founders. Its significance is reflected in the magnitude of festivals hosted in this here throughout the year.

Another highly noticeable attraction center in the eastern town is the old town square. With the number of people moving in and out of this town it’s clear that life is up and about for an old town like this dating century back. This town also hosts the museum of decorative arts that range from furniture, glass work, porcelain and tapestries. The beautiful decorations of this museum have historical significances that reflect on the values, customs and the ways of life of the people who lived here long time ago.

The Charles Bridge has been said to attract many visitors who come to see the great construction of the bridge after undergoing bad damages that were occasioned by terrible floods that hit the area hundreds of years ago. The bridge also has wonderful sculptures that enhance its beauty.

On the western bank there are a couple of attractions that can’t miss the eye of a visitor like the famous Lennon wall that was named after a legend rock musician. This wall was faced with controversy when young Czechs started writing grievances on it, alongside its historical graffiti a move that prompted the authorities to step in. This particular wall has therefore been seen as a simple of love and peace by youths for many years.

The Czech Republic’s president’s place the Prague castle, is said to be a “must see” for any visitor gong to Prague. Serving as the political and historical center for the state it has undergone several reconstructions to achieve its current status. There is several other tourist destinations are that accessible for the Prague castle making it very strategic and convenient for state’s governance.

Hradcany and Hradcany has become one of the most prominent attraction sites in Prague due its strategic position. Besides being surrounded by famous attractive palaces it is next to the fascinating Prague castle and the Loreta square.

Beyond the city of Prague there are other marvelous attractions like the vinohrady a place believed to have been covered by vineyards before it was split into municipal districts. This district provides for the state’s second largest park. Another noticeable attraction is the petriknsika Rozhledna a high steel tower in Prague that resembles the Eiffel tower. From this tower one can get a clear skyline view of Prague especially during clear days. Being one of the major tourist attractions of Prague, it has been mounted with an elevator to enable the disabled to have a chance to witness the feeling of being at the top of this sixty metre high tower.